Skip to content Skip to footer
The Art of Gamemastery 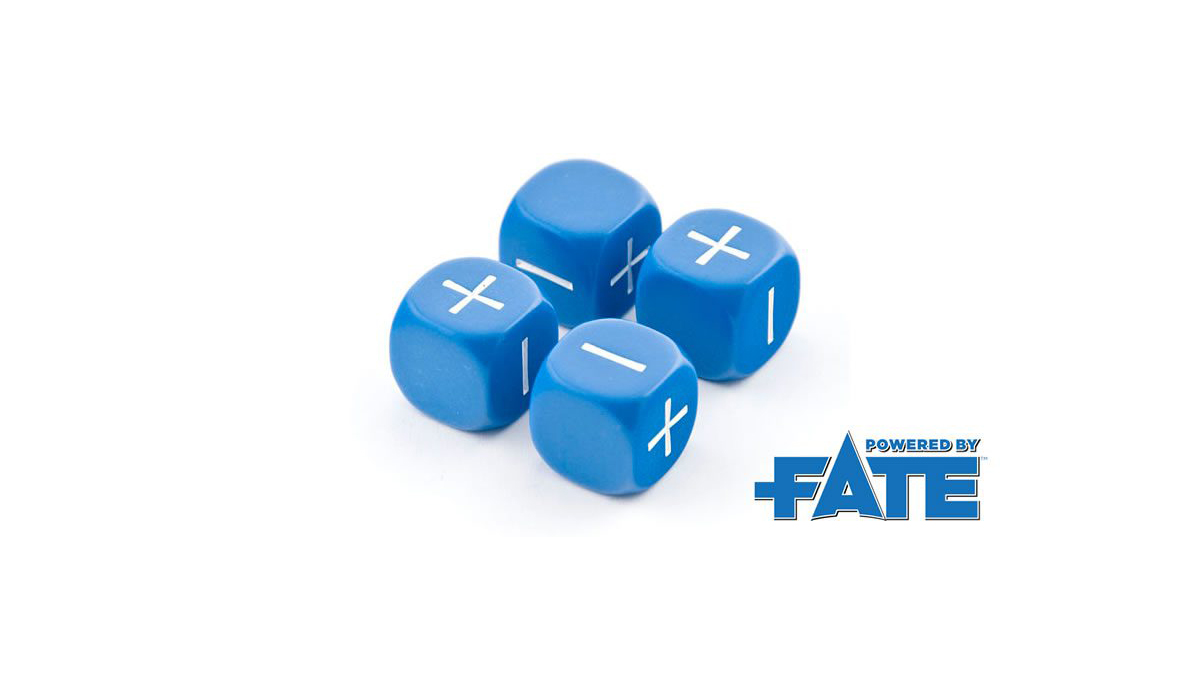 Fate Without the FUDGE

I’m currently in the process of creating a new RPG based on a hacked version of Fate Core. One of the best things about Fate is how extensible and “hackable” it is, however there’s one facet of the system that is historically quite controversial—it uses FUDGE dice. For those who are unaware, fudge dice are special six-sided dice that, instead of rolling a number between 1-6, they either roll a +, –, or 0. Each face appears on exactly 2 sides of each die, meaning you get a range of results from -1 to 1. In Fate, you roll four of these dice, so for any given roll, the range of results is -4 to 4.

These dice are unique and act as a change up in the sea of d20 or d6 dice found in most tabletop RPGs, however they suffer from a couple really big problems. First, working with negative numbers makes the math more annoying. Luckily, due to the relatively small numbers you are working with, it’s not that bad in practice. However it still requires a bit more mental gymnastics by players to calculate the results. Second, it acts as a barrier of entry to Fate-based games, as all players—or at the very least, every table—needs a set of these FUDGE dice. Of course, not as many of these are manufactured as are other kinds of dice—first party or otherwise—and their availability is usually not so great.

[EDIT: After sharing this article with several people, I’ve realized that I may have accidentally made it seem like the math of 4df was a big problem. This was not my intention. The context of this article which I believe I did a poor job of signifying is that I am making a TTRPG that uses Fate but won’t be marketed or advertised as a Fate game. It will stand alone as its own thing, so my target audience isn’t just fate players. I wanted to use dice that were familiar to everyone, regardless of background. The extra math and my complaints around the commonly recommended alternatives below are just my opinions and my reasoning why I sought something different from the norm.]

Because FUDGE dice—and really any sort of non-standard dice—are so controversial within the greater tabletop RPG community, hobbyists like myself have sought out alternatives to FUDGE dice that present a similar probability curve, but use standard dice that you can find anywhere. Before we get into my personal recommendation, let’s first talk about some of the commonly recommended alternatives.

EvilHat themselves (the creators of the Fate Core system) actually recognize these problems and provide an alternative directly in the Fate Core rules. Unfortunately, out of all of the alternatives that we’ll discuss, this is actually the worst option in my opinion.

Essentially, EvilHat suggests rolling a pair of regular d6s and treating a 5 or 6 as a +, a 3 or 4 as a 0 and a 1 or 2 as a –. I find this approach to be quite painful because now, not only do you need to do math for every roll, you also need to remember which numbers equate to which sign on a FUDGE die. This only serves to increase the mental gymnastics that a player or GM needs to do on every roll—something we want to avoid.

This sort of “range of results” idea is becoming more and more common in the indie tabletop RPG scene and it’s a fad I hope disappears quickly because it’s quite a bad design approach in my opinion, but I digress.

Thankfully, it seems the official recommendation isn’t that popular in general amongst the greater tabletop RPG community as it’s not actually recommended that often—even by diehard proponents of the system. Unfortunately though, the most commonly recommended approach isn’t much better.

If you ask about alternatives to fudge dice within the Fate community, or really within any tabletop RPG community, you’ll probably be suggested the 1d6-1d6 approach. This approach is exactly what it sounds like—you roll 2d6 and subtract one from the other. At first, this seems quite attractive. Firstly, not only does it use standard d6’s, but it also involves rolling less dice in total, meaning less numbers to work with.  Also, the probability curve is very close to rolling 4df, only the range of results becomes -5 to 5 instead of -4 to 4. This results in slightly more “swingy” rolls on paper, but in practice it doesn’t seem to make much of a difference. Unfortunately there are a couple big problem with this approach.

First, it involves doing subtraction, which requires more mental work than addition, which is quite a pain in my opinion, especially when negatives are involved—yikes! Also, and perhaps more importantly, it requires that you either have two noticeably different dice—something a player might not always have handy or be able to get easily (most d6 dice are sold in sets of all the same color, making buying them harder as well)—or roll one die then the other, which noticeably slows down play—something we always want to avoid when possible.

For these reasons, I wanted to avoid this option if I could, but if I wasn’t able to find a better alternative (spoiler alert: I did), I planned to bite the bullet and use this approach for my game, as it’s lesser of all evils.

Remember when I said the official recommendation was the worst choice? I lied. There is an option that I see recommended from time to time that is far worse. The option I speak of is the 2d6-7 approach. This approach is so bad I almost didn’t even mention it. In fact, it saddens me that people even bring this one up for discussion in the tabletop RPG community. To be fair, it does produce the same probability curve and range of results as the 1d6-1d6 approach while not requiring separate dice or rolling twice for every roll, but the downsides it does have are far, far more detrimental in my opinion. The fact that you have to subtract 7 from every roll makes this approach absolutely not an option for any game in my opinion.

First, as we’ve gone over, involving subtraction in result calculation requires more mental work on the part of the player—something we want to avoid. Not only that, but in Fate, you are always adding bonus to rolls as well, so now you have to subtract 7, then add x, and possibly deal with negative numbers as well. The amount of mental gymnastics a player or GM needs to go through just to resolve a dice roll is beyond painful with this approach.

Next, out of all the numbers you could be subtracting, 7 is the one. 7 is such an annoying number in general because a) it’s prime, b) it’s odd, and c) it’s not a number that we commonly use in mental math. This makes dice roll resolutions even more painful.

Needless to say, the other approaches discussed in this article are bad, but not unusable. This one however, shouldn’t ever be used in any game at any table.

Now that we’ve discussed all of the commonly recommended options, I’m sure you’re dying to know what my recommendation is and the approach I landed on for my game, right? Well, wait no more. The approach I landed on produces the same probability curve as 1d6-1d6, requires no mental gymnastics on the part of the player, and uses standard dice of any color or style that the player probably already has at their disposal. This is to simply roll 2d6.

It’s so simple that I was honestly hesitant to post this because I felt like I was missing something. Despite this, I’ve been unable to find any flaws in this approach.

After thinking about it, I realized that most of the recommendations try to keep the negative numbers in the roll results. While this might have been important in FUDGE, in Fate, it’s not really important. The only reason it’s like this from what I can tell, is so that it has the same range of values as skill ratings, and thus the Fate Dice Ladder can apply to everything. But I say to hell with the Dice Ladder. The Fate Dice Ladder is just fluff anyway, and not really that important itself to the game. In my opinion, it’s much more important for the game to have accessible dice mechanics than to fluff up the way we announce dice rolls (besides, memorizing the Fate Dice Ladder and remembering to refer to every roll by its place on the ladder is an unnecessary pain in and of itself).

I think there’s probably some potential for taking some ideas from PbtA games and converting them to Fate Hacks. Things like the way XP works would be natural candidates for certain genres, for instance.

I’d love to hear in the comments what you think of this idea of using 2d6 in lieu of FUDGE dice as well as what kind of things from PbtA you think would be good fits for Fate Hacks.